How to use Slither to find smart contract bugs

5 minute read
On this page

How to use Slither

The aim of this tutorial is to show how to use Slither to automatically find bugs in smart contracts.

Slither requires Python >= 3.6. It can be installed through pip or using docker.

The last command runs eth-security-toolbox in a docker that has access to your current directory. You can change the files from your host, and run the tools on the files from the docker

To run a python script with python 3:

Command line versus user-defined scripts. Slither comes with a set of predefined detectors that find many common bugs. Calling Slither from the command line will run all the detectors, no detailed knowledge of static analysis needed:

In addition to detectors, Slither has code review capabilities through its printers and tools.

Use crytic.io to get access to private detectors and GitHub integration.

The capabilities and design of the Slither static analysis framework has been described in blog posts (1, 2) and an academic paper.

Static analysis exists in different flavors. You most likely realize that compilers like clang and gcc depend on these research techniques, but it also underpins (Infer, CodeClimate, FindBugs and tools based on formal methods like Frama-C and Polyspace.

We won't be exhaustively reviewing static analysis techniques and researcher here. Instead, we'll focus on what is needed to understand how Slither works so you can more effectively use it to find bugs and understand code.

In contrast to a dynamic analysis, which reasons about a single execution path, static analysis reasons about all the paths at once. To do so, it relies on a different code representation. The two most common ones are the abstract syntax tree (AST) and the control flow graph (CFG).

AST are used every time the compiler parses code. It is probably the most basic structure upon which static analysis can be performed.

In a nutshell, an AST is a structured tree where, usually, each leaf contains a variable or a constant and internal nodes are operands or control flow operations. Consider the following code:

The corresponding AST is shown in: 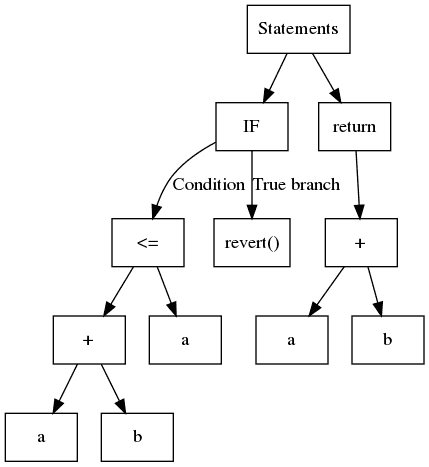 While simple to build, the AST is a nested structure. At times, this is not the most straightforward to analyze. For example, to identify the operations used by the expression a + b <= a, you must first analyze <= and then +. A common approach is to use the so-called visitor pattern, which navigates through the tree recursively. Slither contains a generic visitor in ExpressionVisitor.

The following code uses ExpressionVisitor to detect if the expression contains an addition:

The second most common code representation is the control flow graph (CFG). As its name suggests, it is a graph-based representation which exposes all the execution paths. Each node contains one or multiple instructions. Edges in the graph represent the control flow operations (if/then/else, loop, etc). The CFG of our previous example is: 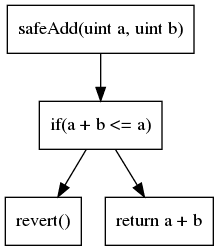 The CFG is the representation on top of which most of the analyses are built.

Many other code representations exist. Each representation has advantages and drawbacks according to the analysis you want to perform.

The simplest type of analyses you can perform with Slither are syntactic analyses.

Slither can navigate through the different components of the code and their representation to find inconsistencies and flaws using a pattern matching-like approach.

For example the following detectors look for syntax-related issues:

In contrast to syntax analysis, a semantic analysis will go deeper and analyze the “meaning” of the code. This family includes some broad types of analyses. They lead to more powerful and useful results, but are also more complex to write.

Semantic analyses are used for the most advanced vulnerability detections.

Slither comes with built-in data dependency capabilities, thanks to its intermediate representation (discussed in a later section).

An example of data dependency usage can be found in the dangerous strict equality detector. Here Slither will look for strict equality comparison to a dangerous value (incorrect_strict_equality.py#L86-L87), and will inform the user that it should use >= or <= rather than ==, to prevent an attacker to trap the contract. Among other, the detector will consider as dangerous the return value of a call to balanceOf(address) (incorrect_strict_equality.py#L63-L64), and will use the data dependency engine to track its usage.

If your analysis navigates through the CFG and follows the edges, you are likely to see already visited nodes. For example, if a loop is presented as shown below:

Your analysis will need to know when to stop. There are two main strategies here: (1) iterate on each node a finite number of times, (2) compute a so-called fixpoint. A fixpoint basically means that analyzing this node does not provide any meaningful information.

An example of fixpoint used can be found in the reentrancy detectors: Slither explores the nodes, and look for externals calls, write and read to storage. Once it has reached a fixpoint (reentrancy.py#L125-L131), it stops the exploration, and analyze the results to see if a reentrancy is present, through different reentrancy patterns (reentrancy_benign.py, reentrancy_read_before_write.py, reentrancy_eth.py).

An intermediate representation (IR) is a language meant to be more amenable to static analysis than the original one. Slither translates Solidity to its own IR: SlithIR.

Understanding SlithIR is not necessary if you only want to write basic checks. However, it will come in handy if you plan to write advanced semantic analyses. The SlithIR and SSA printers will help you to understand how the code is translated.

Slither has an API that lets you explore basic attributes of the contract and its functions.

To load a codebase:

A Slither object has:

A Contract object has:

A Function or a Modifier object has: