Ethereum is a distributed network of computers (known as nodes) running software that can verify blocks and transaction data. The software application, known as a client, must be run on your computer to turn it into an Ethereum node.

Note: it is not possible to run an execution client on its own anymore. After The Merge, both execution and consensus clients must be run together in order for a user to gain access to the Ethereum network.

You should understand the concept of a peer-to-peer network and the basics of the EVM before diving deeper and running your own instance of an Ethereum client. Take a look at our introduction to Ethereum.

If you're new to the topic of nodes, we recommend first checking out our user-friendly introduction on running an Ethereum node.

What are nodes and clients?

A "node" is any instance of Ethereum client software that is connected to other computers also running Ethereum software, forming a network. A client is an implementation of Ethereum that verifies data against the protocol rules and keeps the network secure.

Post-Merge Ethereum consists of two parts: the execution layer and the consensus layer. Both layers are run by different client software. On this page, we'll refer to them as the execution client and consensus client.

Before The Merge, consensus and execution layer were separate networks, with all transactions and user activity on the Ethereum happening at what is now the execution layer. One client software provided both execution environment and consensus verification of blocks produced by miners. The consensus layer, the Beacon Chain, has been running separately since December 2020. It introduced proof-of-stake and coordinated the network of validators based on data from the Ethereum network.

With the Merge, Ethereum transitions to proof-of-stake by connecting these networks. Execution and consensus clients work together to verify Ethereum's state.

Modular design with various software pieces working together is called encapsulated complexity. This approach makes it easier to execute The Merge seamlessly and enables the reuse of individual clients, for example, in the layer 2 ecosystem. 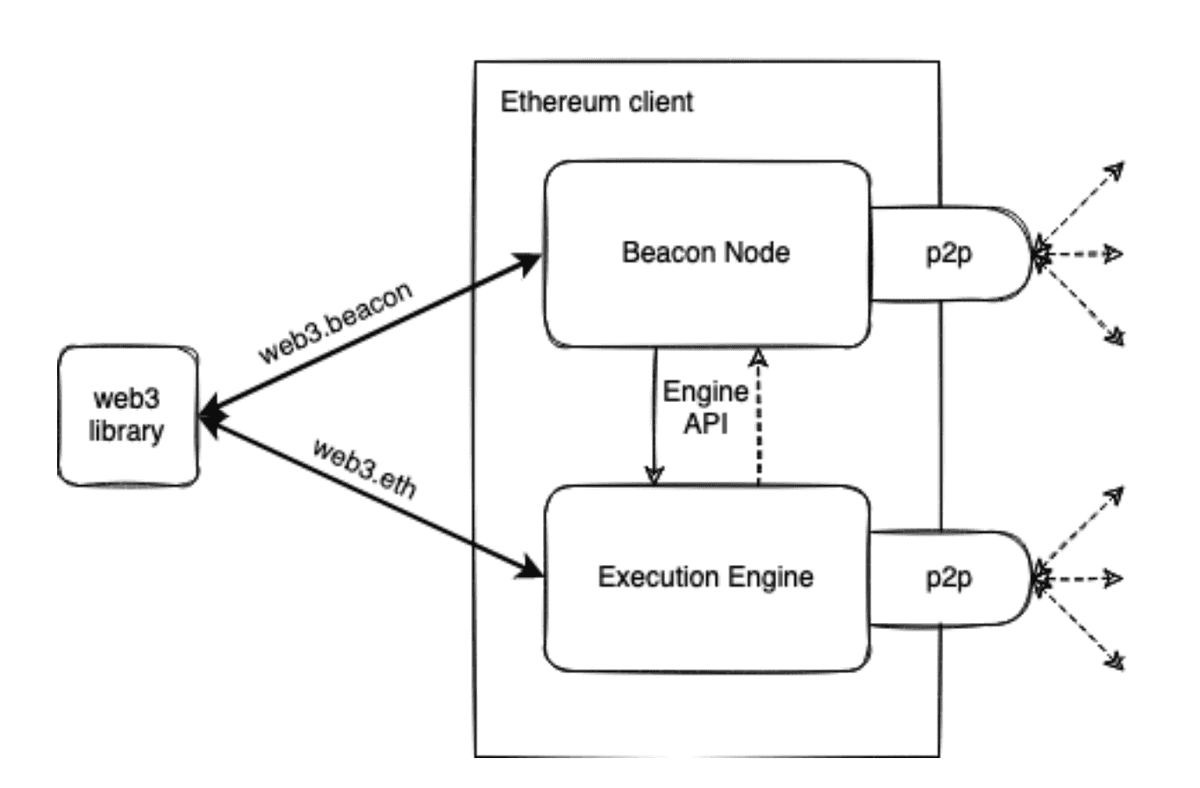 Simplified diagram of a coupled execution and consensus client.

Both execution clients and consensus clients exist in a variety of programming languages developed by different teams.

Multiple client implementations can make the network stronger by reducing its dependency on a single codebase. The ideal goal is to achieve diversity without any client dominating the network, thereby eliminating a potential single point of failure. The variety of languages also invites a broader developer community and allows them to create integrations in their preferred language.

What these implementations have in common is they all follow a single specification. Specifications dictate how the Ethereum network and blockchain functions. Every technical detail is defined and specifications can be found as:

Tracking nodes in the network

Multiple trackers offer a real-time overview of nodes in the Ethereum network. Note that due to the nature of decentralized networks, these crawlers can only provide a limited view of the network and might report different results.

Instead of downloading every block, light nodes download block headers. These headers only contain summary information about the contents of the blocks. Any other information required by the light node gets requested from a full node. The light node can then independently verify the data they receive against the state roots in the block headers. Light nodes enable users to participate in the Ethereum network without the powerful hardware or high bandwidth required to run full nodes. Eventually, light nodes might run on mobile phones or embedded devices. The light nodes do not participate in consensus (i.e. they cannot be miners/validators), but they can access the Ethereum blockchain with the same functionality as a full node.

There are also potential routes to providing light client data over the gossip network. This is advantageous because the gossip network could support a network of light nodes without requiring full nodes to serve requests.

Ethereum does not support a large population of light nodes yet, but light node support is an area expected to develop rapidly in the near future.

Syncing clients in any mode other than archive will result in pruned blockchain data. This means, there is no archive of all historical states but the full node is able to build them on demand.

Why should I run an Ethereum node?

Running a node allows you to directly, trustlessly and privately use Ethereum while supporting the network by keeping it more robust and decentralized.

Running your own node enables you to use Ethereum in a private, self-sufficient and trustless manner. You don't need to trust the network because you can verify the data yourself with your client. "Don't trust, verify" is a popular blockchain mantra.

A diverse set of nodes is important for Ethereum’s health, security and operational resiliency.

If you run a full node, the whole Ethereum network benefits from it.

Running your own node

For a beginner-friendly introduction visit our run a node page to learn more.

If you're more of a technical user, dive into more details and options on how to spin up your own node.

Setting up your own node can cost you time and resources but you don’t always need to run your own instance. In this case, you can use a third party API provider like Infura, Alchemy, Chainstack, or QuikNode. Alternatively, ArchiveNode is a community-funded Archive node that hopes to bring archive data on the Ethereum blockchain to independent developers who otherwise couldn't afford it. For an overview of using these services, check out nodes as a service.

If somebody runs an Ethereum node with a public API in your community, you can point your light wallets (like MetaMask) to a community node via Custom RPC and gain more privacy than with some random trusted third party.

On the other hand, if you run a client, you can share it with your friends who might need it.

This table summarizes the different clients. All of them pass client tests and are actively maintained to stay updated with network upgrades.

Note that OpenEthereum has been deprecated and is no longer being maintained. Use it with caution and preferably switch to another client implementation.

For more on supported networks, read up on Ethereum networks.

Each client has unique use cases and advantages, so you should choose one based on your own preferences. Diversity allows implementations to be focused on different features and user audiences. You may want to choose a client based on features, support, programming language, or licences.

Hyperledger Besu is an enterprise-grade Ethereum client for public and permissioned networks. It runs all of the Ethereum Mainnet features, from tracing to GraphQL, has extensive monitoring and is supported by ConsenSys, both in open community channels and through commercial SLAs for enterprises. It is written in Java and is Apache 2.0 licensed.

Besu's extensive documentation will guide you trough all details on its features and setups.

Erigon, formerly known as Turbo‐Geth, started as a fork of Go Ethereum oriented toward speed and disk‐space efficiency. Erigon is a completely re-architected implementation of Ethereum, currently written in Go but with implementations in other languages under development, e.g. Akula. Erigon's goal is to provide a faster, more modular, and more optimized implementation of Ethereum. It can perform a full archive node sync using around 2TB of disk space, in under 3 days.

Go Ethereum (Geth for short) is one of the original implementations of the Ethereum protocol. Currently, it is the most widespread client with the biggest user base and variety of tooling for users and developers. It is written in Go, fully open source and licensed under the GNU LGPL v3.

Learn more about Geth in its documentation.

Nethermind is an Ethereum implementation created with the C# .NET tech stack, licensed with LGPL-3.0, running on all major platforms including ARM. It offers great performance with:

There are multiple consensus clients (previously known as 'Eth2' clients) to support the consensus upgrades. They are running the Beacon Chain and will provide a proof-of-stake consensus mechanism to execution clients after The Merge.

Lodestar is a production-ready consensus client implementation written in Typescript under the LGPL-3.0 license. It is maintained by ChainSafe Systems and is the newest of the consensus clients for solo-stakers, developers and researchers. Lodestar consists of a beacon node and validator client powered by JavaScript implementations of Ethereum protocols. Lodestar aims to improve Ethereum usability with light clients, expand accessibility to a larger group of developers and further contribute to ecosystem diversity.

More information can be found on our Lodestar website

Nimbus is a consensus client implementation written in Nim under the Apache-2.0 license. It is a production-ready client in use by solo-stakers and staking pools. Nimbus is designed for resource efficiency, making it easy to run on resource-restricted devices and enterprise infrastructure with equal ease, without compromising stability or reward performance. A lighter resource footprint means the client has a greater margin of safety when the network is under stress.

Implemented by Trinity. Works like fast sync but also downloads the data needed to execute latest blocks, which allows you to query the chain within the first few minutes from starting.

Prysm is a full-featured, open source consensus client written in Go under the GPL-3.0 license. It features an optional webapp UI and prioritizes user experience, documentation, and configurability for both stake-at-home and institutional users.

Teku is one of the original Beacon Chain genesis clients. Alongside the usual goals (security, robustness, stability, usability, performance), Teku specifically aims to comply fully with all the various consensus client standards.

Teku offers very flexible deployment options. The beacon node and validator client can be run together as a single process, which is extremely convenient for solo stakers, or nodes can be run separately for sophisticated staking operations. In addition, Teku is fully interoperable with Web3Signer for signing key security and slashing protection.

Teku is written in Java and is Apache 2.0 licensed. It is developed by the Protocols team at ConsenSys that is also responsible for Besu and Web3Signer. Learn more in Teku docs.

To follow and verify current data in the network, the Ethereum client needs to sync with the latest network state. This is done by downloading data from peers, cryptographically verifying their integrity, and building a local blockchain database.

Synchronization modes represent different approaches to this process with various trade-offs. Clients also vary in their implementation of sync algorithms. Always refer to the official documentation of your chosen client for specifics on implementation.

Full sync downloads all blocks (including headers, transactions, and receipts) and generates the state of the blockchain incrementally by executing every block from genesis.

Fast sync downloads all blocks (including headers, transactions, and receipts), verifies all headers, downloads the state and verifies it against the headers.

Light client mode downloads all block headers, block data, and verifies some randomly. Only syncs tip of the chain from the trusted checkpoint.

Snap sync is the latest approach to syncing a client, pioneered by the Geth team. Using dynamic snapshots served by peers retrieves all the account and storage data without downloading intermediate trie nodes and then reconstructs the Merkle trie locally.

Optimistic sync is a post-merge synchronization strategy designed to be opt-in and backwards compatible, allowing execution nodes to sync via established methods. The execution engine can optimistically import beacon blocks without fully verifying them, find the latest head, and then start syncing the chain with the above methods. Then, after the execution client has caught up, it will inform the consensus client of the validity of the transactions in the Beacon Chain.

In practice, this means your node connects to a remote service to download recent finalized states and continues verifying data from that point. Third party providing the data is trusted and should be picked carefully.

There is a lot of information about Ethereum clients on the internet. Here are few resources that might be helpful.